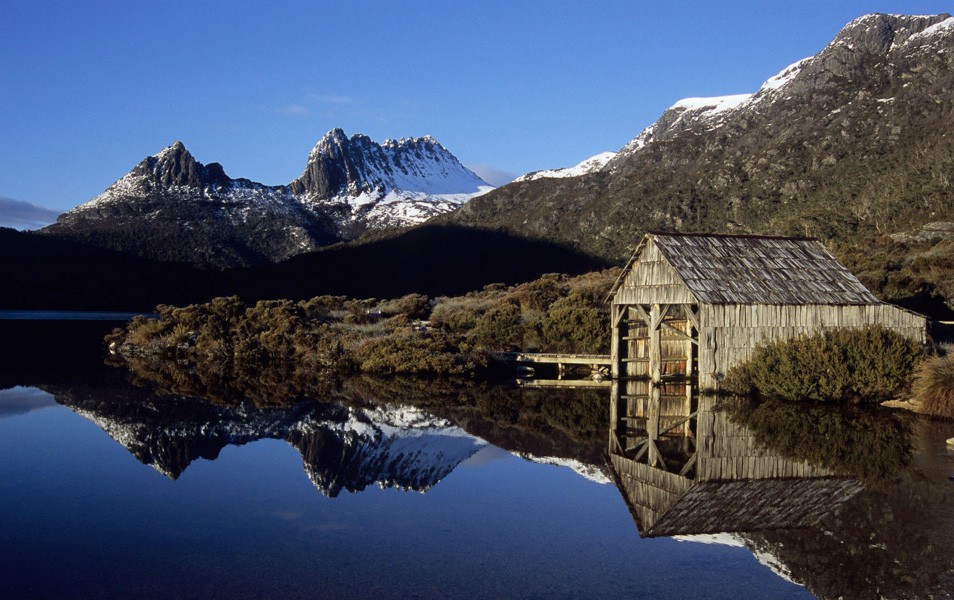 Ever since the current shuttle bus service was introduced over a decade ago, it has been operating out of temporary facilities located on the former airstrip. As the most visited location in the Tasmanian Wilderness World Heritage Area (TWWHA), Cradle deserves much better. Hence the Tasmanian National Parks Association (TNPA) is, in principle, supportive of what is now proposed, that is:

However, we are alarmed that, in its haste to get work started on the new facilities, the Tasmanian Parks and Wildlife Service (PWS) is minimising public scrutiny and allowing some of the tourism industry’s inappropriate ideas (contained in the Master Plan) to proceed without challenge. We are lobbying the parks service to emphasise the importance of better public consultation in the future.

1. Visitor Centre
Most of the former airstrip will continue to be utilised for car parking with the new visitor centre located at the southern end. It will incorporate the shuttle bus station and the same PWS services that are provided in the current visitor centre. It will include an outdoor gear shop (likely to be operated by one of the major chains), a café and a restaurant.

Scrutiny of the plans (which do not appear to have been subject to any public consultation prior to the lodgement of the Development Application, or DA) revealed that the southern end (facing Cradle Mountain) of the main building is to be an enormous window, the full height of the building, which is to be two storeys at this point in order to provide for a first floor bar and restaurant with views to Cradle Mountain. Yet the DA asserts (page 55) that “the buildings proposed and the development area will not be visible from the TWWHA”. It is self-evident that if Cradle Mountain is visible from the Visitor Centre, then the Visitor Centre is visible from Cradle Mountain. The TNPA representation drew attention to this, leading to a not entirely satisfactory response: “Council has discretion to consider an increase in height of a building, provided the height is not more than 10.0m and does not have adverse impact on the landscape values of the area”. The TNPA considered an appeal but our legal advice was that we had no chance of forcing the removal of the unnecessary second storey.

PWS has subsequently claimed to have considered visibility from within the TWWHA, so why was not this information provided in the DA? The answer is probably a communication breakdown between PWS and the consultant who prepared the DA, but it is an extraordinary oversight from an agency which needs to reassure both the public and the World Heritage Committee that it takes seriously the assessment of all aspects of the impact of proposed tourism developments.

Note that the TNPA has never claimed that the visitor centre will be particularly visible from locations within the TWWHA such as Marions Lookout or Cradle summit – the facilities at Dove Lake and Ronny Creek are much closer and more prominent – our concern was that the height required to accommodate a commercial bar and restaurant on the first floor with a view to Cradle is inconsistent with the planning requirement to “minimise visual impact if … visible from any part of the Tasmanian Wilderness World Heritage Area”.

2. Transportation
PWS has provided more detail on changes to transportation infrastructure. The cable car (visitor centre to Dove Lake) proposed in the Master Plan is still subject to some sort of ongoing feasibility study but has ceased to be an immediate concern because the far more obvious (and far less controversial) option of an upgrade to the shuttle bus service is proceeding as rapidly as possible. This will involve replacement of the current “small” buses with “medium” buses. This will approximately double capacity because standing is permitted on the “medium” buses (not allowed on the current ones). The road itself will not need to be widened, only the passing bays, and it is also proposed to construct a few more of these. This all seems promising but more opportunity for experienced local users to provide feedback on the detail of the proposed changes would have been appreciated.

3. Dove Lake
We have been assured by PWS that new facilities at Dove Lake will reduce the footprint and visibility of the current carpark. Advice from PWS is that the design has yet to be finalised but there will be fewer parking spaces and an undercover viewing shelter which will also replace the current “temporary” shelter for shuttle bus passengers – and an extended toilet block. The viewing shelter is to be concealed by soil and native vegetation on the roof, as was done with the current toilet block. Let’s hope that it can be established more quickly than the 15+ years required for the toilet block!

The TNPA currently has an open mind on the merits of what is proposed. We have been promised a briefing by PWS as soon as the design is finalised and PWS intend to advertise the DA for public comment in October. Unlike the visitor centre, this is within the TWWHA so a more rigorous assessment will be required.